I told myself not to weigh in on this subject because it is already gathering too many electrons – far beyond those which can actually bring progress to this existence we manage to preserve on this Earth.  SO I will allow Michelle Smith Glass to express herself as a qualified female person.

This is a picture of me and Newt Gingrich posing as Gap Models (meaning sad, hungry people staring into the distance away from one another). I like to take these because they make me laugh. A few weeks ago I was a guest on The Tonight Show with Jay Leno and so was Newt. His staff people, or whatever politicians call their posse, seemed nice so when I met Newt I asked him if he would take a silly picture with me. He said “Sure. Tell me what to do.” So I told him what to do. He didn’t really get the “sad” part down, but he tried and was a good sport and quite friendly. I liked him.

I don’t usually agree with him and I’m aware of just about every public fact about his not so stellar private life, but I liked meeting him. And I wanted to take a nap on his belly. He was soft, warm and snuggly. It was like being hugged by a Republican Teddy Ruxpin. So, I posted this picture on Twitter. For a laugh. I am a comedian. I am not a philosopher, politician or anything else to be taken seriously. It says “comedian” right there on my Twitter profile. Well, after posting it, I was slammed with hate posts from people on the left. They couldn’t believe I would pose in a picture with him and call him a good sport. Well, I did and he was. I was shocked that anyone takes anything I do seriously because I certainly don’t and I’m the one in charge of me. Even writing that sentence hurt my head. Nonetheless, people did take it seriously and reacted with the usual awful amount of hate social media can drum up. I think anonymity empowers people in the worst ways but I really couldn’t believe it.

But, let’s back up for a second.

I know relatively nothing about ‘celebrities’ unless they are comedians I am actual friends with. I don’t watch E! or any of the shows where I would get information regarding these celebrity people. I’m just not interested. I preferred the old days where we knew little about celebrities and what we did know was probably made up. Oh, Liberace is in love with and married a lady? Good for him. I doubt it . Whatever. Who cares. But at least up until about ten years ago, in order to become a celebrity you had to do something. Anything. Sing. Dance. Eat Fire. Juggle babies. SOMETHING. Now, ‘celebrity’ is an actual job. Whatever that means. Snooki and the Kardashians. I don’t know what any of them do but I’m assuming nothing because I’ve yet to see them do anything so I’m not interested in knowing more about nothing. If you like that kinda stuff, well then I’m happy for you. Seriously, good you for. We all have our thing. I’m usually watching people being murdered on the ID Channel, super weirdos on NatGeo, sports or politics. So unless you’re murdering someone, hunting alligators in a swamp, hitting or catching a ball or debating politics, I probably don’t know or care who you are.

So, when I was heading over to NBC, a friend texted me and said that Newt was one of the other guests. I was really excited. I’ve watched him for 20 years in every televised debate that he’s ever been in. As I said, I don’t usually agree with his positions but I respect him. I never voted for him but I loved that he was in the game. He’s played the game well and hung tough. He’s smart, and I’d bet he’d be the first one to tell you that, but I also admire that kind of confidence. I don’t have it. He’s old school and I like old school. His debate performances were always lively and his look of complete exhaustion combined with eye rolling whenever Michele Bachmann spoke was spectacular. He looked at her like a gnat that flew into his dinner party. I respect his love of history. I’m a history geek and it’s nice to know there’s other geeks out there. I like that he clearly likes a steak and not the gym. I couldn’t agree more.

I don’t understand exactly when and or why the division between ideas has become so personal. I have been friends with Larry the Cable Guy for 20 years. He is right leaning. Not a crazy person, just conservative. I am left leaning. Not a crazy person, just less conservative. For Christmas, he has given me Rush Limbaugh books and I have given him JFK biographies. We can agree to disagree and agree on more than people would think. I really think if everyone on congress picked someone from the other side and took a Gap Model picture with them, it might be the start of actual conversations. If we can start with a laugh, maybe we can build from there. If we don’t start somewhere, we will arrive nowhere. And that last sentence is the deepest thing I’ve thought of in 15 years so I should stop writing while I’m ahead of where I thought I could be. I say cheers to Newt for not taking himself too seriously and cheers to the people who did understand that is was for fun and a stupid laugh which I believe is what I’m supposed to be in charge of.

Did you ever wonder why individual American citizens don’t get the chance for a bailout? Let alone TWO?!?

Certainly not back by populist demand, the German government now seems prepared to stop the bitching and moaning long enough to support funding for the sequel to the first Greek Bailout box office flop and enable the EU to wrap up a second package of aid loans to help a struggling Greece or, to be more exact, the German banks that are now terribly exposed to a possible default there. 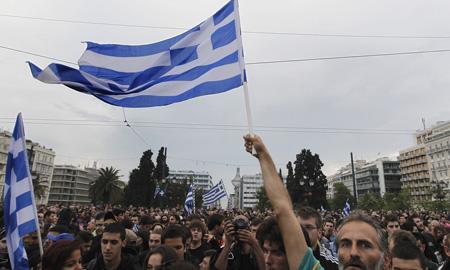 “Germany is considering dropping its push for an early rescheduling of Greek bonds in order to facilitate a new package of aid loans for Greece, according to people familiar with the matter. Berlin’s concession that it must lend Greece more money, even without burden-sharing by bondholders in the short term, would help Europe overcome its impasse over Greece’s funding needs before the indebted country runs out of cash in mid-July.”

But if you want any popcorn, you’re going to have to bring…

This is a very reasonable and well thought out blog entry by a young man I have had the pleasure of making my acquaintance with at a recent Justin Amash event.

The Faith and Politics of Freedom

Unless you have isolated yourself to the underside of a rock for the past several days, you have undoubtedly received the news of the landmark Supreme Court ruling which held that the Constitution inherently requires that same-sex marriage be legal nation wide, state bans therefore in contradiction of the Equal Protection Clause of the Fourteenth Amendment.

If you are a Christian, then it is likely that a feeling of dismay overcame you in witnessing the ubiquitous and outright celebration of sin by our society: the mockery of Christ under its several masks stirs a deep sadness and dejection, generating heartache for His followers. Indeed, irrespective of one’s final convictions regarding the case, any Christian is probable to feel slight apprehension regarding the disconcerting direction of our society – in its many respects. Christians disappointed in the case have valid reasons to display disenchantment, but we must eschew the inadvertent acceptance of several…