Everybody who actually makes the journey to Russia gets there with the intent to sit bundled up in their colors and waving a flag to cheer and yell, ” We Won!” 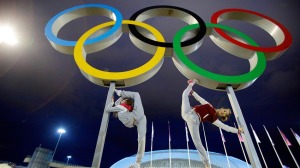 The truth is……….the athletes win, not the spectators nor the family nor the coaches nor the ones who came in 4th place or worse.  The Winners are adorned with a huge gold medallion which is valued around $10,000 (taxable) AND the TV networks and advertisers and the travel industry and the “hospitality” services around this Black Sea resort town in southern Russia.  For a city about the size of Ann Arbor and Ypsilanti combined (with a population of 250,000 with its environs) it has become the oddest venue in recorded modern times since the torch was carried on a chariot. 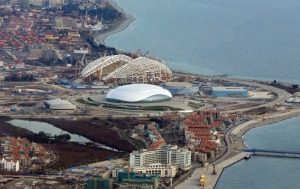 No matter that this has been in the works since before Obama was President.  Sochi was awarded the Winter Olympics in 2007.

Somebody finally realized they were running out of time about a year ago and the largest arena was barely marked out in the dirt with a stadium shovel.  Work and more work was everywhere to be had and this became a hornets nest to get close to finished.  And it is still not really done as was planned.  Oh sure – it was over budget (planned) and supplies were delivered (planned) but the general management and project were sorely lacking.

But back to the original premise:  The Spirit of the Games.  The welcoming crowds (not) and the throngs of well-wishers (not) and the fairness and convenience of home (not) that we all expect in an international spectacle. Some of the athletes were “inadvertently” locked in their bathrooms – the security planning worked – and the travel options were stressing an already bad situation to begin with.  (cue the chariot again)

You’ll have to convince me a lot harder that this whole experience was worth the outlay of discretionary funding (sung to the tune of a 1 year old used car) and additional glee of airline screening and customs checks and having to read the morning Glubnok looking for word on the local rebels plans to disrupt the proceedings with a terrorist attack.
I wonder if Nyquil can handle it? 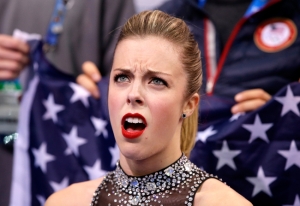